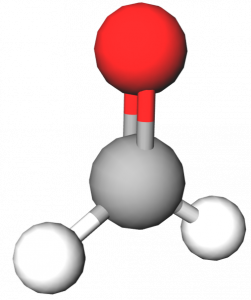 Formaldehyde is an organic compound that consists of carbon, hydrogen, and oxygen. It forms a colorless gas that is most commonly used as a preservative.  Formaldehyde is used in preservation due to its ability to harden tissue on a molecular level which inhibits bacteria from feeding on biological tissue. It’s relatively low-cost has caused this chemical to be used in many applications including chemical manufacturing, building and construction, manufacturing drugs and vaccines, and increasing automobile efficiency.

Health care and laboratory workers work most frequently with formaldehyde since it serves as an ideal chemical disinfectant. Formaldehyde is usually diluted with water to form formalin due to its strong odor and high toxicity. Formaldehyde is used in preparing vaccines so that the virus of interest can be inactivated and therefore be used to make a vaccine. It is also used as an embalming agent due to its preservation properties. Additionally, the health care industry utilizes formaldehyde to sterilize surgical equipment. Those working in the resins industry can also ingest large amounts of formaldehyde since production includes fabricating adhesives and coatings that are derived from this compound.

Although formaldehyde has a distinct pungent odor, workers may not be aware of the levels in which they are ingesting. Inhaling formaldehyde can cause dangerous health implications to humans. The EPA has identified formaldehyde as a probable human carcinogen if exposed to for prolonged periods of time. Therefore, a permissible exposure limit has been put in place measuring 0.75 ppm for a duration of 8 hours. Long-term exposure to small amounts of formaldehyde can cause respiratory problems and skin irritation. Formaldehyde has also been known to cause nose and throat cancer if continuously exposed over long periods of time.

Formaldehyde is able to break down within hours once released into the air, causing it to spread easily. Therefore, enclosed indoor spaces commonly possess higher levels of formaldehyde. When inhaled, this compound is rapidly broken down primarily in the cells of the respiratory tract and released from the body through exhaling. When inhaled in large amounts, formaldehyde can enter the blood stream.

Nematic Technologies has created a chemical monitoring badge that detects and monitors for formaldehyde along with other dangerous airborne contaminants. This badge allows both workers and employers to ensure a safe environment. The chemical monitoring badge provides workers with an all-in-one device that can supply rapid and reliable results. Sensor chips embedded in the device provides high sensitivity, a fast response time, few interfering agents, and both liquid and gas detection.

To find out more contact a member of our team today!